I’m pretty sure there’s a bug in the Crossref Reference Linking plugin in 3.3.0.5 - the way it’s behaving for me right now, it only seems to do the lookup and displays the link if an article is unpublished and republished. It does not seem to do the lookup and display when an article is first published or when a new version is published. Let me explain: 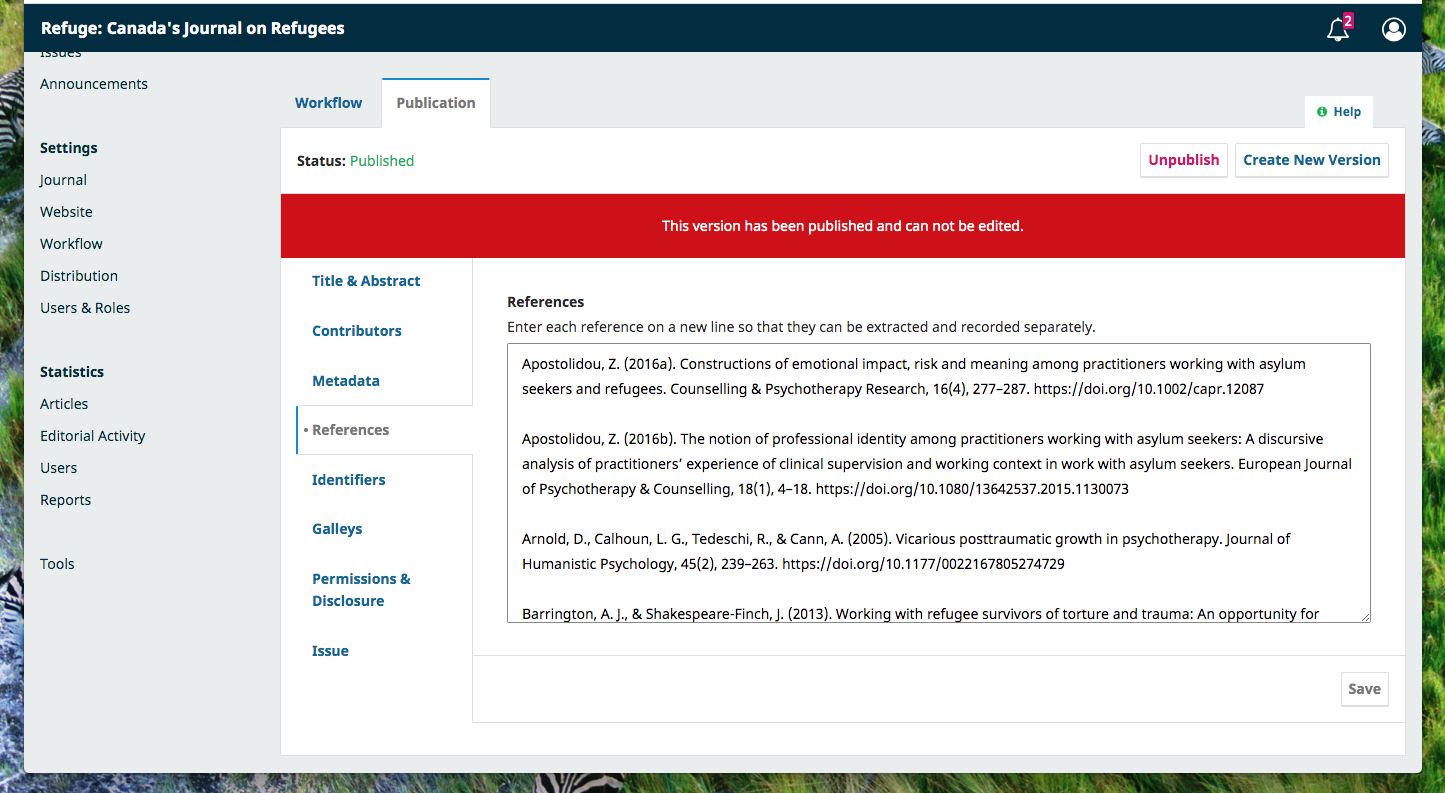 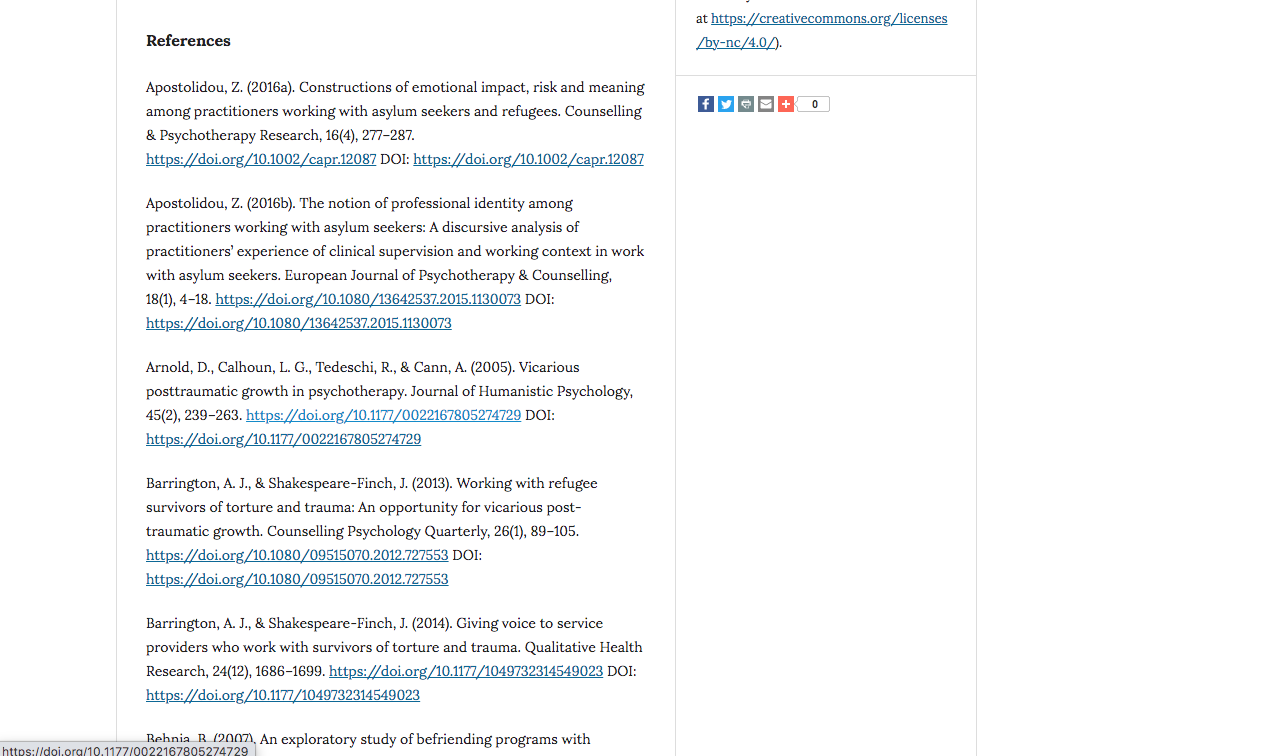 The editor said that she had unpublished and republished the article to make a correction (yes, it ought to have been a new version, but that’s beside the point), and that’s when the duplicate DOIs appeared.

When I created and published Version 2 (without making any changes to the metadata), only the DOIs that were entered in the reference metadata appeared and the DOI for the Gellner & Smerek reference no longer appeared.

This suggests to me that the DOIs are only retrieved from CrossRef and linked when the articles are unpublished and republished.

Hope this is clear, and hope I’m not missing something obvious.

If I can editorialize/give feedback on the plugin: the big challenge with the Crossref Reference Linking in both its 3.1-era version and the current version is that it can’t handle DOIs that have already been entered by the author or editor. This results in a situation where there are duplicated DOIs.

A consequence of this is when I’ve been lucky enough to have library staff working on reference lists, I’ve always had to tell them to strip out any DOIs because the Crossref lookup will just duplicate them. In my experience, it’s unrealistic to expect the authors to find the DOIs for all references cited: the Gellner & Smerek reference from 1968 mentioned above is a good example where the author was likely working from a print copy and didn’t know a DOI existed.

Some contextual instructions asking the author/editor to strip the DOIs might be useful if the plugin were working properly, but I’m sure we all know that user compliance with written instruction is never 100%.

My blue sky feature request would be that the plugin either strip the DOIs (in all the formats they get represented) or hides the user-entered DOIs when displaying the linked references on the front end. Let me know if you want me to turn that into an actual feature request.

Thank you for your feedback. Are you able to report this as a bug on the repository for the plugin here: Issues · pkp/crossrefReferenceLinking · GitHub ?

It is true that the plugin checks for found reference DOIs when an article is unpublished and then published, but this is not the only way, it is actually only the side/secondary way. The plugin requires Acron plugin or a defined cron job that will execute the plugin scheduled task to work properly.
Do you maybe use the Acron plugin? – it is enabled per default. If so, eventually you would need to “Reload Scheduled Tasks” in order for the Crossref Reference Linking plugin scheduled task to be considered. To check if the scheduled task is considered and executed, you can take a look into the DB table scheduled_tasks, if there is class_name = "plugins.generic.crossrefReferenceLinking.CrossrefReferenceLinkingInfoSender". Do you see it in your DB table?

Regarding the other problem: it seems the plugin does not consider the entered DOIs (any more). I’ll take a look at that…
EDIT: as far as I can see, those already entered DOIs were never considered, or? If you know the OJS version where this was the case, can you tell me?

Hi @bozana , I’m talking about 3.3.0.5 as the title indicates. The reference metadata was entered in 3.3.0.4, I believe, not long before the security patch came out.

Acron plugin is enabled for the journal but I haven’t clicked “Reload Scheduled Tasks.” Is that clicking that button required every time we configure the CrossRef Reference Linking plugin for a journal? If so, that would be very handy to indicate in the plugin description and/or in the documentation.

Regarding the other problem: it seems the plugin does not consider the entered DOIs (any more). I’ll take a look at that…

I’m very eager to learn when that gets fixed!

This topic was automatically closed after 3 days. New replies are no longer allowed.