Hello, I need some assistance in importing back content into a new journal. We are using the import feature with the native xml dtd. Articles are imported but some information is missing. We tested one single article before importing the entire back content and we would like this to be solid.

Title and subtitle : they are displayed on the website but not displayed in the metadata 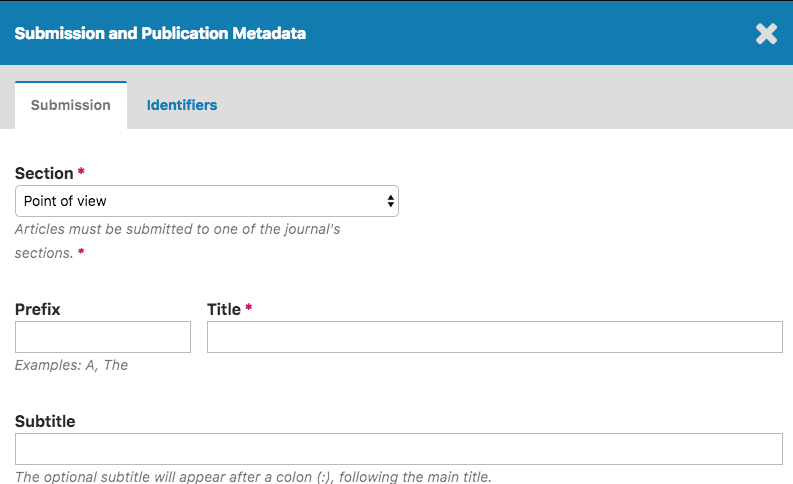 Language : it is not imported in metadata (I don’t think it displays online).
We had added ‘language’ as attribute within ‘article’ element as below in XML but it looks it was not imported. There is no other tag available in XSD for ‘language’.

DOI : not imported in metadata and not displayed. Regarding this point, I have not completed the configuration for DOI attribution, but if I add a DOI manually in the identifiers it is displayed.
We had added ‘DOI’ as attribute value within ‘ID’ element as below in XML but it looks it was not imported. There is no other tag available in XSD for ‘DOI’.

For the import to the perfect, it would ideally import pdf files (or galleys), but I cannot figure out how to perform this, other than manually importing each single galley to the article.

I paste below our test import xml file

Any advice and suggestion to improve our import will be greatly appreciated!
Lucia

Are you importing from an older version of OJS? How are you generating the XML import file?

Hello Amanda,
we create custom xml using the native xml plugin and import them using it.
Initially, as I was importing articles in Italian, some data was captured with the tag <"it=IT>. As an example, consider the field TITLE: the import resulted in the information actually being displayed on the public site, but not populated in the metadata screen; however, when I tried to enter the information in the metadata screen, I kept receiving the error that the title was mandatory. Same for other fields like discipline and keywords. I changed to tag to <“en=EN”> and it went much better: I have managed to import content smoothly, but I found that some data are not imported, like the country for each author, the DOI for each article and the language (in the additional refinements).
I think some of these could not be captured correctly by my team and our difficulty was to get the XML specifications for all importable fields.
In the end I entered missing fields manually. In this case my archive was small and manageable, but I would like to create a reliable import file, in case I add projects with a large amount of data to handle.
I hope I have explained sufficiently: not sure if other users had the same problems I had…
Thanks!
Lucia

Have you looked at our documentation on the Native XML plugin? It includes some sample XML files and other tips.

Hi, Amanda,
I could not locate this documentation… thanks for sharing. We shall review it in detail and hopefully manage to obtain the most consistent import file.
Thanks again!
Lucia