Changing the display order of the editors on the About page?

The journal About->Editors page lists the editors of a journal, but it is not clear what order they are listed in.

A journal would like to list these editors in a specific order. How would I go about doing this? Is it a hidden option I can’t see, a theme customisation, maybe a plugin, or something else?

Hi @jason_judge go to Journal Management > Masthead. Select “The Journal Manager creates titles and adds people under each title”. Create Position Title such as “Editor-in-Chief”, “Assitant Editor”, “Editor Board”… Then add people to each position title. There you can easily sort people by clicking up and down arrows.

Brilliant - thank you. It did not occur to me that this section was the “masthead”.

I’ve added all my editorial teams under “Editorial Team” for now, as the ability to create a new section to sit alongside the “Editorial Team” level does not seem to be working. I can create a sibling section, which appears in the People section of the About page, but it won’t let me move or drag any teams into it - they don’t save. Reordering the teams within the “Editorial Team” section works fine though.

I’m probably missing something there, or there is a bug.

If I drag a team between two categories, I can see the AJAX call going back to the server, with no errors generated. But when I refresh the screen, the team jumps back to where it was.

Now, on another subject - I have noticed that GET requests are used all over the place for updating, creating, moving and even deleting items. That is GET - not POST, or PUT or DELETE since this was an AJAX call. This is very worrying from a security POV, especially as no CSRF tokens are used anywhere. For example I could not find the link to delete an archived article earlier today, so I just formulated the URL from the details I found in a post in this forum, put it into my browser and BAM - the submission was deleted with no complaints or warnings. Anyone could have sent me that URL in an email, even put it into the source of an image, and they could play havoc with my journal if I happened to be logged in at the time. Has this type of thing never been brought up before? It kind of has me a little concerned that I found this the first day of using this software.

I am not sure which version of ojs you are using, I am on 2.4.7 and I do not have any “Editorial Team” section in journal management settings.

Maybe “Editorial Team” was one of the groups of teams that I created when first switching over to the “build it yourself model”. Creating multiple groups of teams should allow you to add teams to each group and move the teams between groups, but each team gets stuck in the first group only.

And by “group”, I mean the thing that is labelled as “title”, created using “Create Position Title” and described as both a “title” and a “category” in the position Create Title page, and which cannot be edited once it is created (can’t get more confusing than that!) but does not have team members in it directly. I assume a “team” is defined a group of people with the same “position title” in the masthead.

each team gets stuck in the first group only.

Jason look how I did my one. See the picture below, there you can easily re-arrange titles pointed with green color. But you can neither create nor move the red colored one. 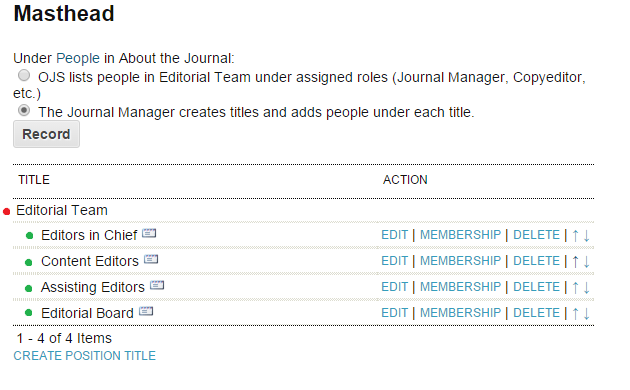 Yes, that’s what mine looks like now, and rearranging the green teams under the red Editorial Board works fine (both using the arrows and the up/down arrows). You can create another red group in the “create position title” page, and it appears on the About page, as described in the documentation. You just can’t drop a green team into it.

Here is my layout. See “Section Incharge” which is on the same level as “Editorial Team” which I would like to move some of the teams to. It looks to me like the functionality is mostly done, but is not fully working:

Notice also that the “Section Incharge” category does allow editing and removing. This makes a lot more sense - not being able to change the name of the first category (Editorial Team) is also a bug IMO.

oh I see yes you can create red one as well. The first ones name is not allowed to changed I guess. You can only edit the code which is most probably at locale files.

I’m on ojs-2_4_7-1 as it was installed a week ago. Of course ojs-2_4_8-0 came out a day later, but I have not had a chance to upgrade, so maybe its fixed in that. There has been a good three months of updates between these two versions. I’ll check, and if it’s not fixed, raise it as an issue.

Nothing has changed with respect to the Editorial Team area between OJS 2.4.7-1 and OJS 2.4.8.

I see you’ve filed your concerns about GET and CRSF as a git issue – let’s continue that part of the conversation over there.

Okay, thanks. I’ll raise the organisation within the masthead as a separate issue too. I’m still trying to get my head around the structure of the application (I’m more used to Laravel these days) so that I can hopefully come up with some more practical suggestions or PRs.

Sounds good. The re-ordering problem will be a little quirky, as OJS 2.x is a 10-year-old codebase with dynamic features like drag-and-drop ordering grafted onto it late in the game, but it’s not a bad opportunity to dive into the code. If you get a chance to look at the master branch, which will be released as OJS 3.0 this year, I hope you’ll be pleasantly surprised. Let me know if you’d like any guidance.