Describe the problem you would like to solve
Some journals and presses need to distinguish between different versions of an article or monograph. For example, a journal that publishes the Accepted Manuscript right away before eventually publishing a Version of Record have no way to indicate this in the reader-facing frontend.

Describe the solution you’d like
Allow for a version type to be selected that identifies what kind of version this is. Version types that have been suggested are:

This type should then be displayed to readers and included in metadata distributed to third-parties.

Who is asking for this feature?
A journal that wants to distinguish between Accepted Manuscript and Version of Record.

Additional information
Screenshot of the OJS interface which does not show the version type. 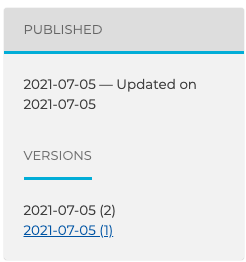 Screenshots of examples from another publishing platform.

This has been investigated by the devs in #4860. The biggest technical challenge is that there is no support in distribution schemas, such as OAI or Crossref. Some existing vocabularies were found in JATS date-type and a Version Type vocabulary from COAR. However, neither is widely adopted.

For this proposal to succeed we would need to see agreement from a wide variety of our community on a few core version types to support. These may be different for OPS and our other platforms.