I’d like to pass along an issue some of my journal editors are having with the localization in some of the language labels in OJS. They would like it if the labels used for the buttons to switch languages didn’t necessarily include localization info.

Here’s an example of what I’m referring to: 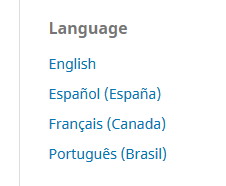 This is a journal of translation that publishes material in four languages that are not necessarily tied to locations: the Spanish content may be from Europe, South America, or North America; the French content may be from anywhere in la Francophonie, etc. More importantly, there are political ramifications to labeling the Spanish interface of the journal as being from Spain (as opposed other Spanish-speaking countries). Even if they wanted to have multiple interfaces for multiple versions of, say Spanish or French, OJS doesn’t have locales for every Spanish- or French-speaking country so this isn’t an option. It’s also worth noting that English doesn’t have a locale attached to it.

In another case, a journal publishes in French and English; French authors include substantial populations from both France and from Canada. However, editorially speaking (and probably for most readers), it’s not actually that important to distinguish between the two.

I don’t want to suggest that localization be done away with because I know it’s important for some users. However, would it be possible to allow the labels to be edited for those users who don’t want to commit to a locale when selecting a language?

You can edit those labels by changing registry/locales.xml on the server – but beware that you’ll be changing it for all journals; it’s not possible to change the labels for just one journal.

That should work well for us, thanks!