Problem after upgrading to OJS 3.2.0-2. Crossref Plugin and another errors

…is caused by the ADODB library we rely on for schema management failing to drop a constraint in the database that has been removed from the XML schema descriptors. You should be able to correct it by running:

That modification should work fine on your current database; this will need to be run after the upgrade is executed, not before, in case you execute the upgrade again from backup for some reason.

Hi @asmecher,
thanks again. It is now possible to make submissions.
But when using the Quick Submit plugin and others functionalities, these error appears:

Error 4 (I think this about Quick Submission):

Could you help me again?

Hi all,
I am not sure if this is the right post for my problem. I upgraded to OJS 3.2.0.2 and crossref plugin could not deposit DOI properly. Here are the messages from the error log. It also led to a HTTP 500 error page.

Please help and let me know what can I do to solve the proper export of DOI to crossref?

Hi @asmecher,
would it be possible to correct these errors?
I am very concerned, as this machine is in production, with more than 80 journals and I’m getting a lot of complaints.

Mainly this: Error 4 (I think this about Quick Submission)

Thanks @asmecher. The issue has been solved!

I’m in the same situation here, unable to create a galley:

Can you describe the problem in more detail? 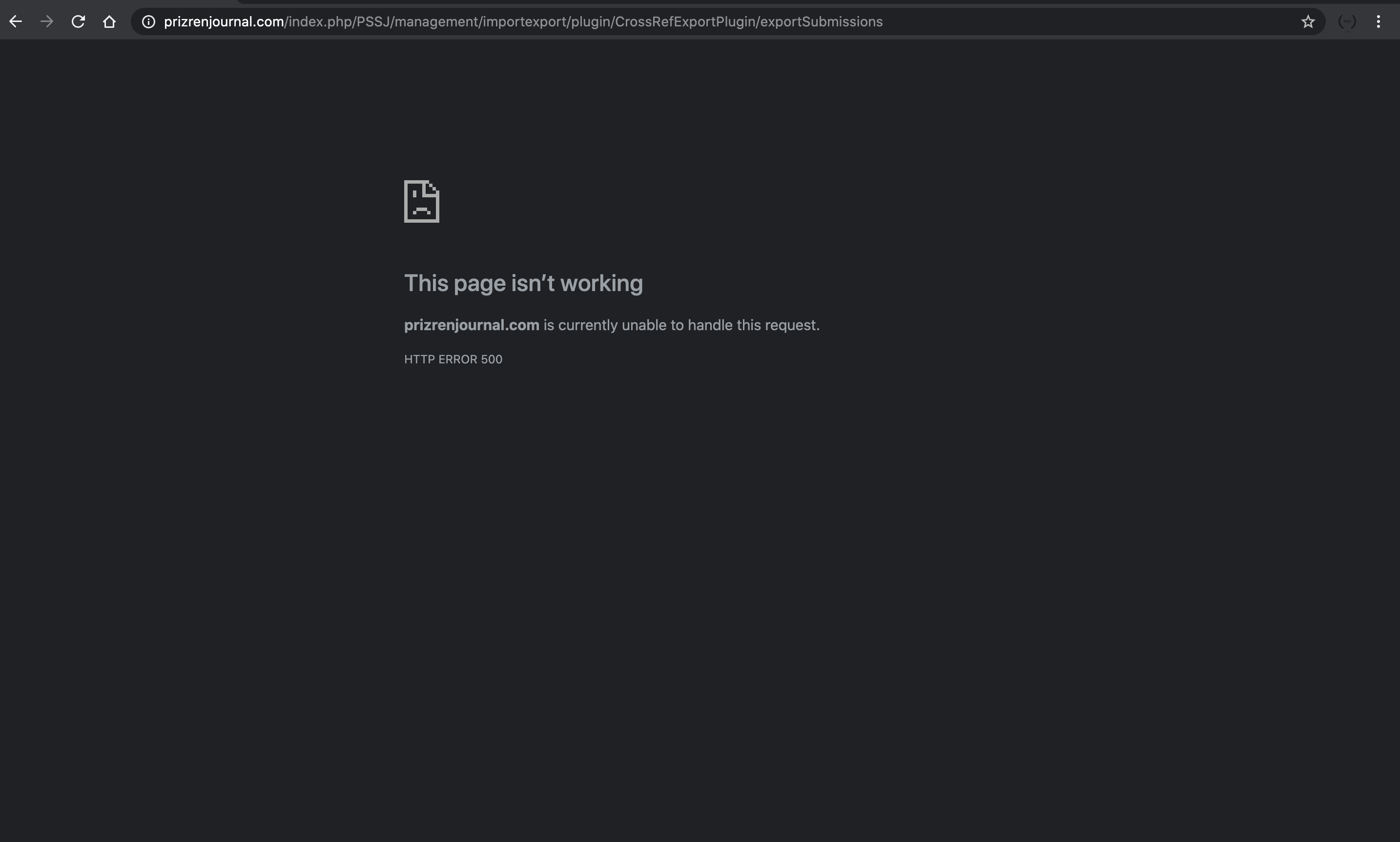 Element ‘orcid_id’: ‘ORCID’ is not a valid value of the local atomic type.

Element ‘orcid_id’: ‘ORCID’ is not a valid value of the local atomic type.

However recently, all of the teachers, were confronted with a worldwide pandemic situation which shaped a different scenario of teaching. A different mechanism that all of the teachers are getting used to, which is online education. The purpose of this study is to analyze how effective was teaching English online for the pupils oral proficiency, whilst communication in English language was limited. Videoconferencing and converting lessons into videos and send them as documented evidence, were two of the main tools mostly used from teachers in schools in Gostivar. The methodology used for this research was qualitative, and it uses two instruments, an observation, and an interview.

The overall study results show that, even though pupils showed improvement in EFL (English as a foreign language) oral proficiency, since the materials used to lecture online where persuasive; some students also had difficulties learning autonomously, without depending on the teachers help. Furthermore, according to the interview responses, the appropriate and detailed lesson planning, helps in combining activities which would emphasize speaking more in online teaching classes.


The purpose of this paper is to provide an overview of how the media generally function in relation to their responsibilities to the state. Knowing that despite the legal protection enjoyed by the media under international conventions and in general domestic legislation, all criminal offenses committed through the media are defined in one way or another by adequate legal norms to prevent and sanction such offenses abusive.

During the different periods of law adoption in Kosovo, it is evident that the sphere of criminal and civil liability for criminal offenses committed through the media has changed. This is due to the fact that various provisions have not infrequently been used to restrict freedom of expression, which is otherwise the most basic, but also the most sensitive provision provided by Article 10 of the International Covenant on Human Rights. Therefore, in this paper will be explained the fluidity of the legislation on criminal and civil liability for criminal offenses committed through the media and that starting from international conventions, the Constitution of the Republic of Kosovo, international legislation compared to domestic, comparison of provisions which with the old codes have been defined as criminal offenses, while today those offenses are considered of a civil character and for these offenses there is only civil liability.


Corruption as a phenomenon, not only destroys the economic base of a country, but it violates the basis of its legal system, legislation, judiciary, public-private institutions, cultural and health institutions, social policies of society and others. In order to know and study the phenomenon of corruption, we must definitely stop at some criminogenic factors which have a significant impact on the appearance of the occurrence of corruption. Thus, corruption as a criminal occurrence is present throughout the history of the state and human society and as such has always been considered as an immoral and harmful social occurrence. Corruption is especially expressed in times of crisis of certain societies, but also along with the strengthening of the state, the development of business activities, the interference of the state in the economy and the bureaucratization of society it has found its housing of presence as a criminal occurrence. Today, the occurrence of corruption has become one of the obvious problems in most countries almost all over the globe. Factors that have influenced the appearance of this occurrence are numerous, such as: the transition of society, economic crises, unemployment, poverty, mass media, the war and the circumstances of the war, the unresolved housing problems, etc. For this, in recent times, corruption has been characterized as one of the most negative social occurrence. Cooperation between relevant state institutions and citizens for this type of criminal activity is extremely important for detecting corruption as a criminal offense.

Could not convert selected objects.

It looks like there was a 500 error, which should be described in more detail in your PHP error log. (When quoting XML or other types of code, try using the code formatting tool in this forum – the

button, that is. That’ll help make sure the code is readable.)

It looks like there was a 500 error, which should be described in more detail in your PHP error log. (When quoting XML or other types of code, try using the code formatting tool in this forum – the

button, that is. That’ll help make sure the code is readable.)

Can you describe or can you write a sample to understand more clearrly, and what i want to do to fix it?

this php erro is for doaj plugin or Crossref plugin?

I’m looking for a message corresponding to the 500 error your screenshot showed above.

in my php system doesn not show any error, do i need update or upgrade crossref plugin? or to reinstall

A 500 error, which your screenshot indicates, should always be logged in more detail in your PHP error log.

The error that is being recorded is :

I think the issue is that you’re using a version of the Funding plugin that’s not compatible with your OJS, but I’d suggest checking with the author of that plugin.